Defining a Board for meet.coop

In the first phases of meet.coop, a small group of operational members has been creating the foundations and running the minimum viable product, the meet.coop service. During a regular All Hands meeting, ops members came together, sometimes accompanied by user or community members, but mostly ops members, to seek consent for the way forward. All Hands by nature is focused on operational matters.

There has not been a dedicated space for defining, monitoring and adjusting the collective’s strategy. At certain moments All Hands meetings have been hijacked and converted into a Strategy meeting, or with specific workshops like in December 2020 to define the roadmap, or the first All Hands in 2022, on January 13th.

During this last All Hands we discussed the need to set up a Board, like most Cooperatives have a Board or a Council. This thread is to start of a more detailed discussion on how this Board could look and how we can start to prototype it.

Some aspects that have been suggested:

Proposal for a board @ meet.coop

Work is under way to assemble a prototype Board or Council for meet.coop. It is one of the central venue spaces of the coop, alongside the Standing assembly of Ops members (‘All-hands’), the operational Circles, and the General Assembly.

A board is seen as a way to elicit, enable and enact substantial contributions to stewardship and strategy from all membership classes. Active user members bring perspectives of our user communities, as well as expertise and connections. Operational members contribute in the Board as de facto members thro the existing Circle machinery (via Circle conveners), and probably carry out a majority of the implied work (although other Board members may also undertake tasks).

An appropriate procedural form for the board might be a collective of User and Operational members, working out in practice how their concerns (fleshing out the concerns of the General assembly) might be enacted by Operational members (who already have the monthly All-hands meeting as their Standing assembly). This is a negotiation. It is also an evolutionary and collaborative process of mutual learning and respect: Learning to cooperate.

The contributions of members in the Board are in general gift work rather than paid work, receiving recognition of some non-wage kind(s) which might for example include mutual credit as well as ‘cultural’ forms of recognition (eg moderator, facilitator or convener roles) and privileges ‘in kind’ (free BBB accounts, …). However, it remains open for members of the Board to undertake Bounty tasks when they are qualified for these.

Individual commitments of work time in this venue should be an order of magnitude less than Operational members. Board members commit to a minimum of 10 hours per annum.

Elements of the role include:

We engage our member communities in terms of three broad ‘sectors’ of activist commitment and productive contribution in the commons. See the schema: 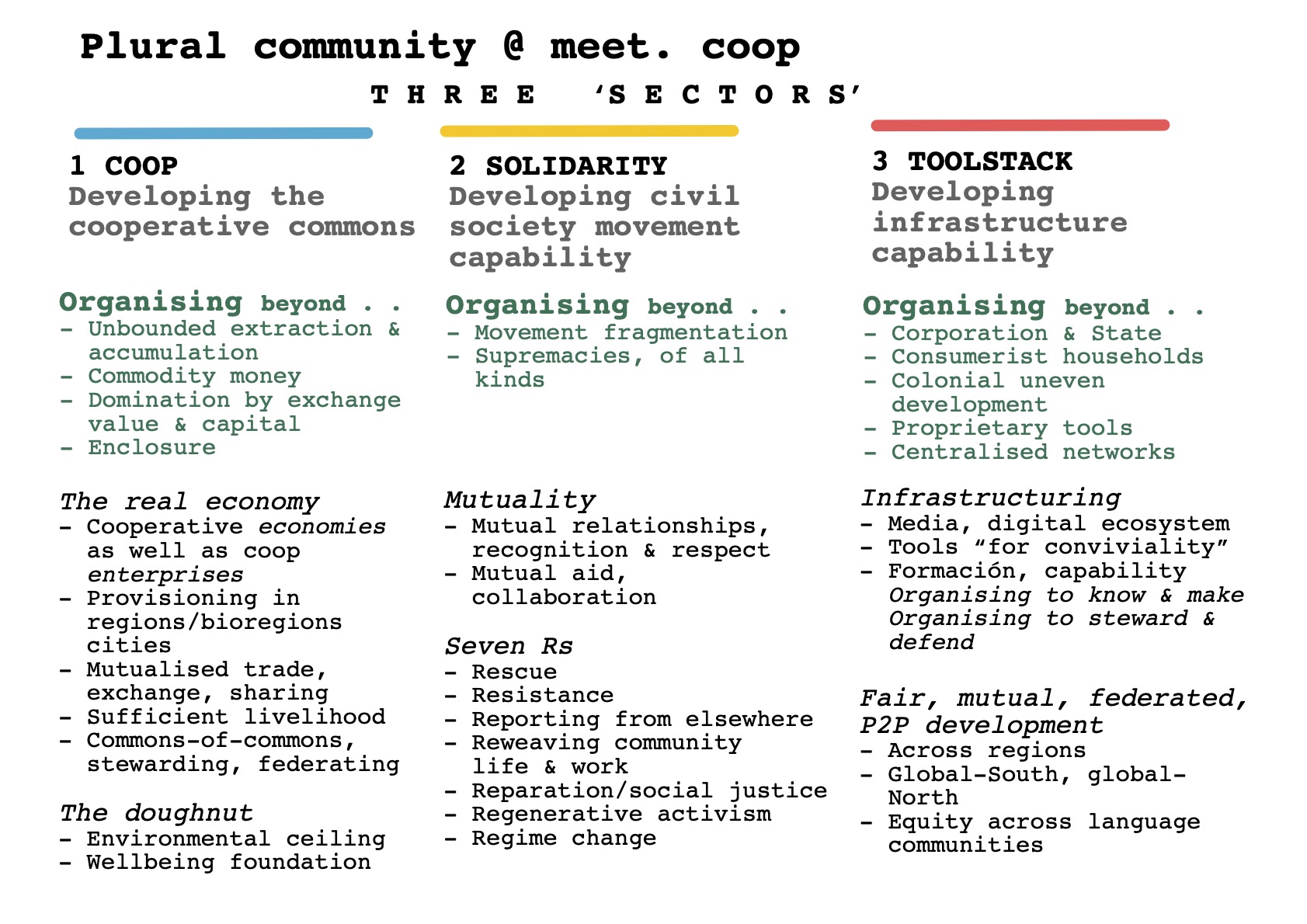 I’m not familiar with the internals of how meet.coop works, but what does “supremacy” mean in this context? I’m familiar with “intersectionality”, I think, but surely we’re not promoting (say) white supremacy here?

Indeed. Presumably the intent is an ‘anti-supremacist’ practice.

@anarcat @richjensen Definitely the opposite! Rather than fall into the usual long list of forms of supremacy (patriarchy, coloniality, white supremacy, transphobia, speciesism, etc etc) the intention is to signal a commitment to a practice of ‘organising beyond supremacies of all kinds’ (as the slide above puts it). Intersectionality is then one of the perspectives that enables that?

Another way to develop the emphasis would be mutuality (which has a nice long anarcho-socialist pedigree); and pluriverse (Arturo Escobar) also helps the framing. Etc. Many facets! Of course these politics are complex, so just writing one phrase in a bullet list tends to leave things underspecified, sorry. Would have been better to write: Matters of supremacy and intersectionality. I’ll change it.

All this is part of a commitment to contribution in commons, I would say. Thanks for prompting on this.

Adding in some thoughts, with the caveat that I have a Canadian non-profit lens when looking at matters of board governance.

The framing set out here is for board members to provide strategy and stewardship, but some of the roles seem more tactical and operational to me. In my experience, boards are most useful when they are given a clear mandate to provide higher level strategy and guidance for orgs, rather than getting into the weeds of how things operate day-to-day. Of course, they can also take a more hands on approach, but that seems to be the purview of the operational Circle? As one example, I don’t think having Board members moderate a space in the forum would be the best use of their time; instead, members could have other opportunities to bring matters before the board (perhaps through a space in the General Assembly?).

8-10 hours sounds like the right amount of time, but would suggest having meetings quarterly, rather than bi-monthly. This gives more runway to try out board directions/suggestions before reporting back on whether a certain action was effective or not.

In keeping with my comments re: strategy and tactics above, perhaps consider framing the elements of the roles as ‘advise on’ rather than ‘review’. To me, review sounds more hands-on, rather than taking the long view on how to, for instance, build funding relationships.

Creating a board seems like an exciting and important steps forward for meet.coop. I’m interested to see how it unfolds!

Great to have your voice here @andia thanks. Yes, there are tensions and boundaries that are difficult to navigate. I guess we (@wouter @mikemh ) do have the feeling that, in some sense, the most committed and energetic Board members will ‘do work’. In this regard we take some inspiration from MayFirst for example, which has a Board elected from the User and Ops membership that does a large part of ‘the work’ - which is both organising work in the User community(ies) and platform-development and -provisioning work within the coop. So we’d like to walk in that middle zone too, to the extent that our Board members prove willing and able. To be seen! We fully expect Hypha to be present in the Board, and to bring its voice(s) and insights to the navigating of these tensions and roles.

The anticipated Board-member role in the Forum is simple enough: on one hand, as a public channel for mutual communication between Board and User members, on the other hand as a private channel for intra-Board communication (as an alternative to email, matrix or other chat-type and deliberation-type textual media). So - basically these are seen as functional supports, assisting Board members to do what the they wish to do and speak to whom they wish to speak to.

We do anticipate a lot of dependence on Discourse as a software workhorse that can be configured to furnish a number of elements in our internal and external toolstacks - not only a forum but also messaging and maybe documentation too (handbook). Thus, walking a line, between overstretching a software workhorse until it possibly becomes less than perfect in some of its usages, and an over-complex array of UIs and system admin demands, generatd by ‘too many’ apps in the stack.

‘Walking that line’ in every area? And remaining at least ‘good enough’. One of the key responsibilities of the Board? Thanks again @andia for pushing this question along.