From Exchange to Contributions

Apart from this being the title of an interesting essay by Christian Siefkes it seems to represent the approach we’re exploring within The Online Meeting Cooperative. We try to avoid the introduction of market exchange mechanisms of a commercial service where one side produces and sells and the other side contracts and pays for. Instead we are defining voluntary contributions to make this collective resource work and sustain over time within our ecosystems, with members taking producer and consumer roles whenever they like to. We want this to be a commons, a collective resource contributed to and governed by its members, who can be part of it without high barriers, where knowledge is shared and the resource itself can be replicated at any time.

We request people and organisations to become members and make their contribution through any of the “custodian” member organisations who take the funds in custody for the collective initiative, these to be spent on what is considered necessary for its operation. Also we don’t think that money is the only valuable resource to contribute and in fact many people and organisations are contributing a combination: time spent on relevant tasks, servers and also money. It is this combination of contributions that makes the commons thrive (and more complex!).

On the user account side we aim to be as open and inclusive as we can, which in this initial phase is a collective experiment to find out where are the limits. Of course our servers have at least three types of scarcity, or limited capacity that we will need to take into account:

So if we find that any of these limits is reached too quickly, one thing to do is to invest more in fund raising to expand our server capacity, another is to have some priority for our members vs those who didn’t contribute at all. This is a dilemma that we should weigh thoroughly.

Some possibilities:
a. we have open registrations and anyone can open up at least one personal room and have sessions with a duration of 60 minutes (the demo server of the BBB project itself does so)
b. allow members to run as many rooms as they want and for illimited duration; request large gatherings to be scheduled on our Event calendar.
c. restrict storing video recordings to members (BBB official project has switched recordings off in their demo).

Another possibility is to have different servers, as we have now, one demo server completely open for the public and one or more production servers dedicated to members or (larger) events (see wiki:servers).

A possible scheme for contributions and membership rights could then be (please criticise!): 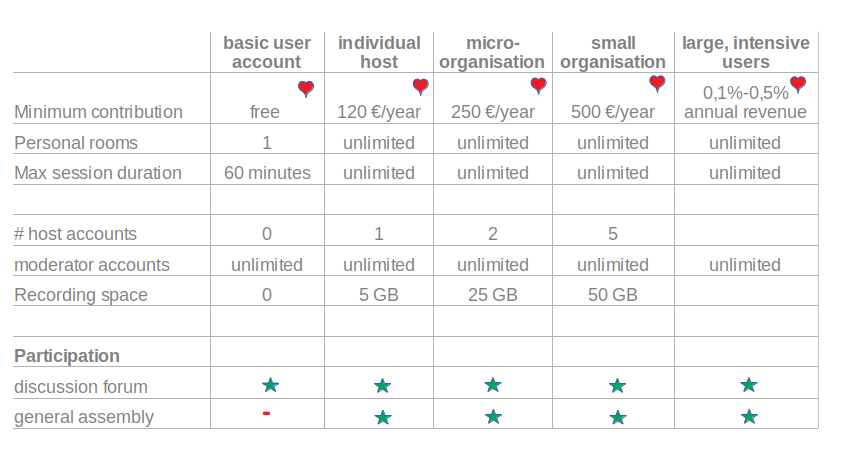 A note on governance: while we seek rough consensus in our meetings and daily work, important decisions will need to be decided upon by a General Assembly where all members can participate and cast their votes. If we achieve a more decentralised organisation of local/continental nodes, it’ll be clear that many day-to-day decisions can be taken care of by the node and its membership, while strategic decisions will maintain to be made in the General Assembly. There’s lots of details to be discussed to put this into place. Do you think this is the right direction? Please be nice when criticising

and help build this together!

That all sounds great to me!

I think having an demo server on which we perhaps wipe the data on a regular basis (and / or don’t allow recordings) is a good way to get people to try our BigBlueButton service.

I think the thoughts on contributions and membership rights are good but I’m afraid that they are another reason for us to be looking at a series of linked but autonomous BigBlueButton server / racks of servers (eg ca.meet.coop, de.meet.coop etc) — accounts and disk quotas will exist per instance and we will also probably need slightly differing terms and conditions per instance as they will come under different legal authorities.

Incidently I think I met Christian Siefkes back in the days of the Oekonux project, and Stefan Merten has a review of his book here, however I’m afraid I haven’t read either.

This is all good stuff @wouter

It relates to the discussion we will have in Open2020 . Those linked notes are a little out of date, but show the direction. You’ll note that section 4 of this session has meet.coop responses to the discusssion?

Mike, I can’t open that link, it maybe that login is required for viewing?

Pardon me @wouter it’s an open page but the link seems to think it’s private ¿?. Here is the page link. The section I’m pointing to is Storyboard Day2: Stewarding in a commons of digital means - Breakouts

I think it would be interesting to discuss the challenges for a decentralised model, as we are discussing here in the forum On decentralisation, and wrt Governance, participation, Contribution & service levels… How we deal with diversity, multiculturalism, inequalities between North & South. Yves Otis and Fred Sultan from Remix the Commons are also very keen on that. Did you think of multilingual participation? Another of the complexities to factor in

So . . are you OK to participate (respond?) in that session @wouter, as proposed?

How we deal with diversity, multiculturalism, inequalities between North & South. Yves Otis and Fred Sultan from Remix the Commons are also very keen on that

Absolutely. In that session there is a panel, and we want the best mix we can achieve in that panel, gender and ethnicity-wise. But not succeeding very well so far. Short notice, people are busy.

Not trying specifically to handle North-South in this event, accepting transatlantic frame on this occasion.

Are you able to help with the panel? I asked @wouter @Sebas891 and @petter (in email) if members of your local orgs might be willing to join the panel? Please draw in colleagues if you can, to avoid a white-male panel (a ‘manel’)? Please email @osb and me with thoughts. Thankx

Mike, count me in to participate in the session. Let me know what I should have prepated. I’m not counting on having much time before to prepare or engage in preps really, how much I would like that. But rather be clear about that. I will keep an eye on the forum and fo ping me when there’s something concrete.
Thanks

Hello Wouter etc i am Jonathan from Webarchitects.
I’ve been following discussions about this with Chris, and online a little, very happy to hear about the developments.
In future i could offer help maybe, with :

On the proposal for pricing, all looks good except (perhaps) the jump from 120 (Individual ) to 250 (micro-organisation) seems a little high, if i may say …?
a) micro-organisations can be poorer than individuals! (from experience!!) and just a few people …
b) people will compare Zoom prices … i think maybe in Euros 100/150 per annum approx ?? (sorry i haven’t checked but i think the 250 price looks expensive??)
c) is the micro-organisations / individuals difference necessary? Perhaps simply one category for both, very low level?
Just a suggestion …

Zoom is rather more expensive so far: https://www.zoom.us/pricing

I’m not sure about the need of an organisation having multiple host accounts. Maybe 1 host account is already good enough. Then there’s differences in storage capacity for recordings.

And Zoom also plays with limits to the number of participants. We might need to go that way as well - although participants that only listen are hardly eating up as much capacity as participants with their webcams activated. The limit lies clearly in the latter. How can we rationalise that fairly so nobody gets their shared server overloaded unnecessarily?

Thanks for response Wouter,
That’s interesting.
I suppose I am thinking of micro-organisation as
= between, say 3-25 participants, (say a max of 100 would feel generous, and yet be little used)
= but i think most individuals would expect to be fully video etc participating, most times (ie mostly “online meetings”)
= very little need for recording, maybe only annual say, AGM?
= max of 2 or 3 to 8 admins would be a good number

… if that’s any help?
I know a lot of groups that sort of service would appeal to
around 100 £ per annum, approx
Cheers

@wouter my calculation on Zoom pricing was mistaken. I currently pay €14.39 monthly = around €170 per year (includes VAT I guess).