Art Brock, co-founder of #Holochain replied to one of meet.coop’s tweets, with following reply:

I’d love to see tools like this start using #Holochain-based micro-service components to make parts fully p2p self-hosted… even if some parts were to keep using servers. 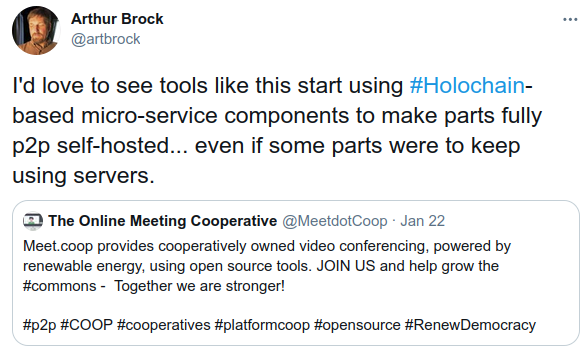 Many of us here share an interest in a more decentralised architecture of the Internet, and Holochain is actively working in that direction (one of the most interesting projects in that area, I dare say). Where peers are autonomous agents in the network, and users who don’t want to run (yet) their own node, can access a webhosted version of a HoloApp (Happ) that can be hosted in the holo.host network. There’s a lot more to Holochain, Holo.hosting - like the Holo mutual credit currency to pay and be paid on the holo.hosting network.

The things is, could we imagine parts of meet.coop to be running on top of Holochain? My first thought would be in the identity and room management, like a way to substitute the Greenlight interface for Happs that could run sessions on a network of BBB servers. This is just some wild thoughts, that won’t be implementable just next week, but maybe there are smarter people than me who have better ideas, both in the meet.coop community and in the Holochain community. If there’d be interest, we could prepare a discussion session to explore possibilities?

Art Brock suggests to do a meet. And also invites us for the hApp architecture course they are starting this week. Is there interest in our community to explore this?

I am excited about holochain and about meet.coop, but IMHO it is still a mid term challenge to see meet.coop evolve in that direction. But if we can explore that together, that maybe fun and interesting?