We propose to adjust the meet.coop membership definition according to the following draft.
Changes wrt the June 2020 defintion:

The draft membership definition is

linked here. If a majority votes in favour and no objections are made, then this draft will become the newly approved definition. In case objections would be raised then these will be considered for a further adjusted version.

This is a regular decision and will be open for voting during 7 days, until the end of the 28th of June.

Clarification: Collaborator members make significant contributions in work or in kind, and are not Ops and not Users.In addition to

organisations that would like to go beyond simply using the service, but cannot commit to take an Operational membership

this also includes organisations that provision our value chain and internal administrative process - like Koumbit, Collocall, Webarchitects, OpenCollective, Platform6. So there’s some flexibility in the kind of relationship we may have with Collaborator members. Some are more voluntary than others. Some are paid ‘rent’ or service fee for their contributions.

Just for completeness, the proposal has been floated in April, and has been discussed both in the Sustainability thread as during last All Hands. Then it was agreed to put it up for votation. So here we go, please add your vote.

The vote is now closed; the decision has been approved by 3 in favour and one abstention. This is the current meet.coop membership policy.

User Members contribute with their usage of meet.coop services and shared resources.

Collaborator Members contribute in work or in kind according to their capability and in line with the needs of the Co-operative.

All membership starts with an application for the desired membership class. Only User Membership applications are approved automatically after complying with the conditions, and will be cancelled when these conditions are not met any longer.

User Members contribute with their usage of meet.coop services

I’m not actually sure what this means! Shouldn’t the core way that a User member contributes be understood as thro financial subscriptions? Then, alongside this, how does usage contribute in the commons? Is this what I would call ‘mobilising’ of the commons, out there, in the broader community? Also - what kinds of shared resources (contributions in-kind?) do User members typically contribute?

This membership policy/classification is pitched largely in terms of obligation. This is fine. Some further future definition will be needed, of privileges associated with each kind of membership, within the various spaces of meet.coop?

indeed “usage” comes with the obligation to financially contribute according to the service level. This term is used in Spanish user cooperatives. They have it defined in their constitution generally (or always?). A user member contributes their “usage” of the cooperatively provided services or goods. Such cooperatives are established precisely to provide these services or goods to their members. It is a rather simple and effective model for a cooperative sustainability model. Staff is paid to provide these goods and services to their user members. Possibly the wording can be refined or explained better.

Indeed the obligations come with privileges according to contribution and service level. Possibly we can develop the details that outside of this definition - so this can one day be fed into a constitution?

OK, ‘usage’ is a translation from Spanish

However, the proposition that users contribute their usage isn’t something I can make much sense of, as an English phrase. I wonder what @graham makes of this, for example? Or @osb

another way of saying would be that users pools their needs, and what they need is to use an online meeting service. As “user members” pool their needs, they pool their “usage”: that’s why we call them “user members” in the first place, right? So usage vs production. We have commoners who produce, who do the work, and run the operation and the we have commoners who have pooled their needs and enjoy the fruits, i.e. the usage of these services.

Maybe the word is English but the term isn’t used so much in this way in English as it is with its translation in the Hispanic world?

In another thread, @Graham wrote:

It’s an interesting idea. Clearly user members do contribute through their usage. If the service doesn’t have people using it then there’s no value in providing it - the value is created at the point where the user uses the service.
It also makes clear that we expect the people and orgs who pay for access to actually use it. While I’ve nothing against people paying and not using the service (effectively making a donation - perhaps as a gesture of solidarity - it’s clearly far preferable that they use it, and through that use, help to improve it).

On this thing of pooling and contributions . . I’m still unable to make any sense of ‘pooling needs’ in a commons. My take is that it’s the commoned means that are pooled : as a commons (stewarded/collectively regulated) rather than as an unregulated common pool (a market, a ‘natural resource’, ‘public domain’, ‘a food bank’, ‘free software’, whatever).

Incidentally, User members might also contribute to provisioning/curating the commoned means, eg thro providing feedback on the platform or thro contributing in the media commons (the forum). They might contribute by funding the provisioning of the platform and not using it (tacit crowdfunding, as Graham notes). But these are incidental or secondary? It’s mobilising of the commons and contributing money for market-related costs that are the users’ basic contributions?

Using is what a commons is FOR

The users complete the cycle of commoning - as below. As Graham implies, it’s preferable (actually, constitutive, fundamental) that User members use the commons.

I don’t see this as ‘pooling’ anything. I see it as collectively (but tacitly) making the commons a commons, by animating it, weaving it into the living of life and the doing of work. This is in parallel with the explicit steering and cultivating of the commons that take place in stewarding and provisioning, respectively. The three constitutive functions that make a commons are represented in this schema, derived from Bollier & Helfrich’s pattern language of commoning.

@wouter writes of ‘usage vs production’, in the schema this = mobilising vis a vis provisioning. Two of the three ‘moments’ of commoning. On top of that, collectively stewarding then makes all the difference! Not all Members contributte in that way? But all can. 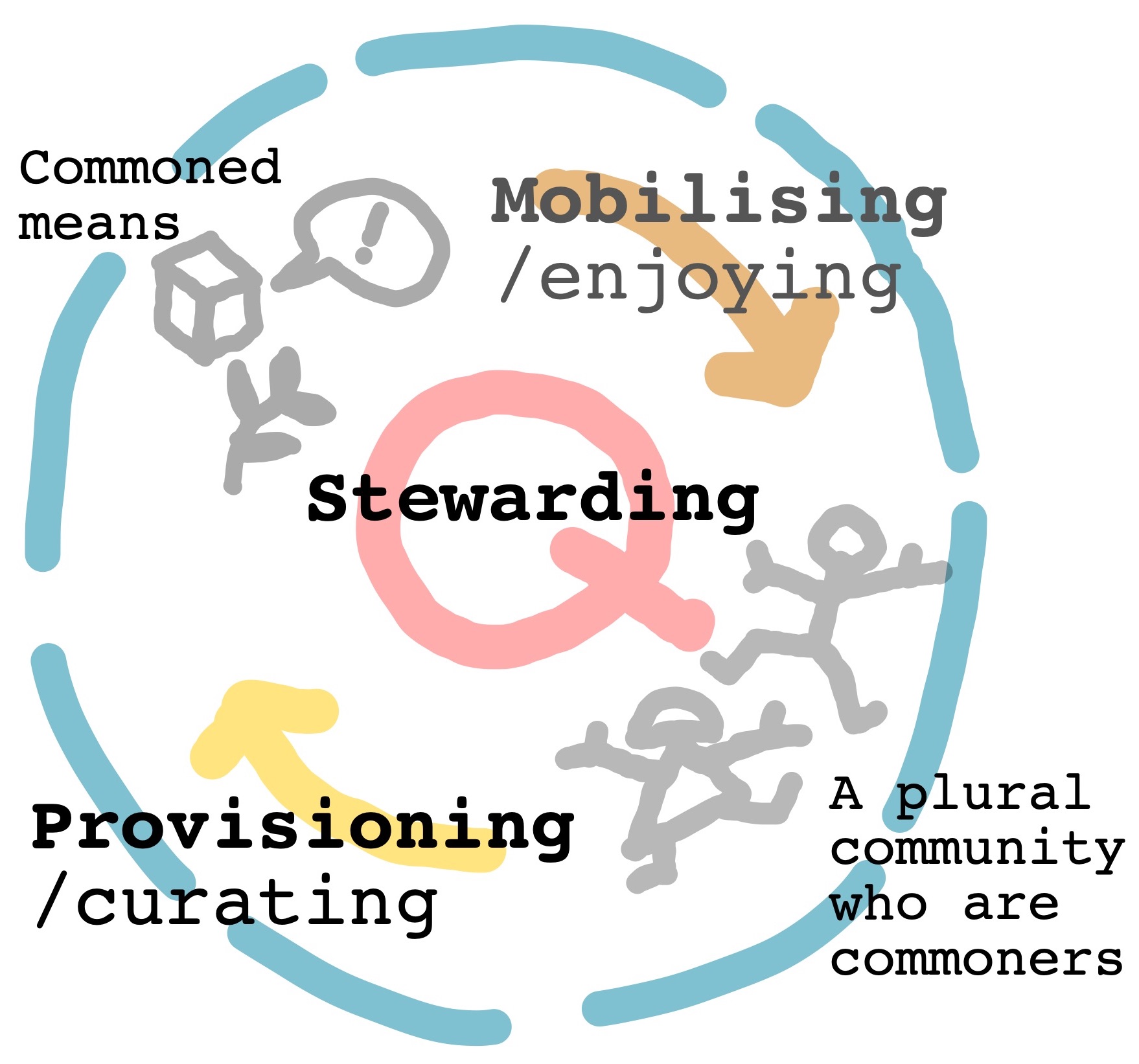 So I guess that in place of

User Members contribute with their usage of meet.coop services and shared resources.

I would say: User Members contribute to the commons with their financial contribution to costs of provisioning, and also with their mobilsing of the commoned means, in ways that give them value-in-use.

I’m still unable to make any sense of ‘pooling needs’ in a commons.

I think we need both the pooled needs and the pooled means to provision. Let me make an example from another commons collective. A food cooperative or buying group. The group identifies a shared need for a certain product and considers to add this to their catalogue, with all the provisioning and logistics this entails. In this example the process starts with pooling needs, then identifying the possible provisioning scenarios and putting it in practice in their collective provisioning system. At least that’s how we did it in our local food coop a few years ago.

In our case we could argue the same. As we try to be User Centred, we first focus on the needs (May 2020: we need an ethical online meeting service), try to pool this need between various groups/members and start pooling means to do the provisioning.

Trying to close out this strand on ‘pooling’ . . I think maybe two senses of pooling may be at work. There’s pooling as a material action in a commons, where some contributed means are pooled, and the pool is governed and used (labour, money, material resources) . And pooling in a statistical sense, as for example when the data from members of a population might be pooled in order to profile the population. It seems to me that ‘pooling needs’ is something of the second kind - a statistical action of some kind, rather than ‘a contribution’.

I’d be glad to suspend this discussion, if that’s OK. unless that statement is regarded as critical.