Strategy - Multi-language in the Community programme

Here we explore ways to develop a multi-language capability in the Community programme, forming part of the protocol for programme sessions.

I am currently taking part in a series of online workshops on Klezmer music, run by two women who are fine musicians, one British the other German, and both fluent in both languages. Their Zoom audience is a mixture of English and German speakers, and all the sessions are run in both languages, with the two women continuously switching back and forth as you might get in the announcements on an airline flight. Sometimes they speak in English first, sometimes in German. As a participant I found that I quickly got used to it, and it runs very smoothly. Yes, it is a little slower than if it were only in one language, but that isn’t an issue in practice.

So, we might try an experiment, with a session in English and Spanish that spans the North/South divide. We could include breakout rooms that are each in only one language, or some in both. That might mean we have to know who is fluent in one or both languages. I think this could be very interesting and exciting. We would need facilitators fluent in both languages.

What do you think?

In this kind of context I’m very inclined to refer to MayFirst, who routinely run meetings (audio only) in dual English and Spanish and are very experienced in this.

I agree this should be an early experiment. I feel it should be done in collaboration with some others - like MayFirst and FOEI for example? Maybe, asking one of them to lead a session. @camille @freescholar @jamie

At the same time, in the pilot cycle of sessions I find myself trying to avoid tackling the language challenge head-on, and to get by initially in imperialist English

There are so many dimensions in the intersectional 'open community’, all with implications for skill and protocol, and it might not be helpful to tackle every one of them at the same time in the same session?

My intuition is, to aim to get economic dimensions moving first (including global-South solidarity economy linkages; also including the doughnut-city perspective) before bringing a stronger more explicit focus to ‘cultural’ dimensions (like language community and translation). Once we get a good global-South economic connection - and more people start to feel invested in the practical-focus - we can follow it into the cultural dimension of language?

Rather than the other way round. I guess it’s the residual Marxist in me - ’the economic’ drives things, in the last instance

So for example, I also tend to see Wouter’s current highlight on ‘education toolstack’ matters (Canvas etc) as an economics-led matter: building a ‘municipalist’ doughnut-city-ish capability in Europe?

Is that making sense? I don’t mean to be dogmatic or reductive, I’m just very aware that we might easily get into experiments that are overcomplex, with too many dimensions in the mix at first.

Something that swings the other way: the European collaboration around municipalist education and doughnut-city capability involves a majority of organisations that work basically in French. So if that focus develops significantly in the Community programme, English-French capability comes to the top of the stack?

Good points @mikemh . My thoughts are that we should be looking for promising candidates for the pilot workshops and see which ones develop. They may or may not involve the language issue or the education toolstack. We need interesting groups that want to present their work and that also can see that support from other groups could be useful to them. That is, have a presentation and discussion where there is good promise of mutual support.

well said, @mikemh and @garyalex. I agree that the multilanguage is important and that we need to focus on concrete needs, i.e. economy first.

As an example, @camille has great experience with multi language meetings with Friends of the Earth International. And inside meet.coop she has been following BBB developments to facilitate this, testing and giving feedback (in this thread). All of this is very useful and we should prepare a test with the tech.circle (who are very busy this month). But maybe in April we could do a session to share experiences on multi-language sessions. I’m not saying that we can necessarily test the developments that Camille has been testing, but at least we get together with those interested to explore a few usecases, set some priorities for the tech.circle in this and then in a second session test them out?

One thing that Jason Nardi told me about the experiences with the World Social Forum on Transformative Economies (WSFTE, transformadora.org): the kept a shared notepad for each language inside the meeting room. This works only for moderators, so the trick is to configure a room as “all join as moderator”. That has a few downsides - in particular that moderators can end a meeting, which sometimes happens accidentally. But for certain contexts that should be acceptable, like I would argue for the Community Programme sessions, what do you think? 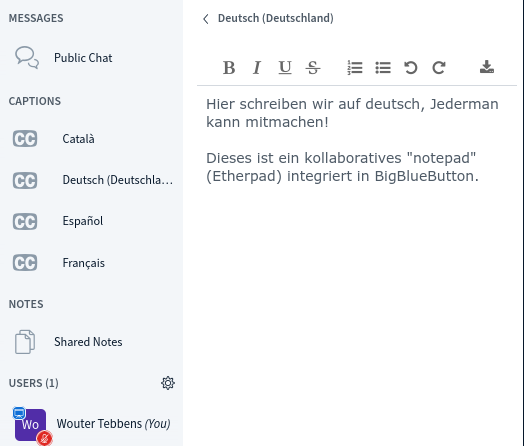 OTOH, when your objective is to produce closed captions for a session recording, then the more regular usage of the closed capture feature in BBB should also be useful. Here is what it says in the documentation:

This is beginning to look complex - more so than I would want to handle myself. It’s great these functions are available but I feel they should be regarded as specialist skills, rather than within the scope of an ordinary meeting coordinator?